Hon’ble Mohan Peiris, has been appointed as the 44th Chief Justice of Sri Lanka on 15th January 2013. His Lordship was the Attorney General of Sri Lanka from 2008 to 2011 and became the Senior Legal Advisor to the Cabinet of Ministers in 2011. Justice Mohan Pieris was admitted as an Attorney-at-Law to the Supreme Court of Sri Lanka in 1975 and as Solicitor of the Supreme Court of England and Wales in 1978. In 1981 he joined the Attorney General’s Department as a State Counsel and retired as Senior State Counsel in 1996. He practiced for a period of 15 years in civil, public law and arbitration. During this time he trained at the National Institute of Trial Advocacy at Harvard Law School, the Centre for Police and Criminal Justice Studies at Jesus College, Cambridge and at George Washington University. He has been on several Sri Lanka delegations to international forums: The United Nations Human Rights Council, United Nations Environmental Program, and South Asian Agency for Regional Cooperation in Law and Tariff Negotiations with the European Commission.

Undergraduate, Post graduate along with PhD research scholars attended the capsule course where they were immensely benefitted by the interactions. During this course Justice Peiris dealt in details, the intricacies of arbitration clauses, providing the students and the faculties a practical approach of how arbitration actually functions. Next, he went on to differentiate between arbitration, conciliation and mediation. He also discussed all the landmark cases and the recent developments in arbitration.

Other than arbitration he also explained the concept of rule of law and its applicability in today’s date. He began from the evolution of rule of law in the 13th century to the modern interpretation of rule of law. He simplified the principles dealt under Rule of law with examples. He also took a class on the comparative analysis of the Indian, Sri Lankan, UK and USA constitution describing how they are different from one another next he made the students aware on the available women rights both in the national and international perspective.

Lastly, he ended this lecture series with a class on the law and social transformation in India through the lens of sociological jurisprudence.

This was Justice Mohan Peiris’s 2nd visit to the university and we are looking forward to a decade long collaborations with him in forms of faculty development program, internships etc. 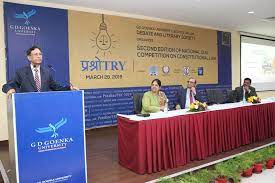 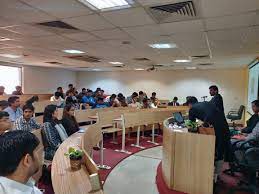