Workshop on MATLAB and Simulink for IoT Implementation and Analysis

Organized by the Department of Electronics & Communication Engineering, SoE; a one-day workshop on “MATLAB & Simulink for IoT Implementation and Analysis” was held on 13th April 2017. This workshop was conducted by Mr Akhilesh Kumar, Engineer-Technical Support, Design Tech Systems. The workshop focused on hands on experience in embedded hardware interfacing with MATLAB & SIMULINK followed by data analysis using open IoT platforms. It was conducted for B.Tech second year and third year students, research scholars, and faculty members. The participants were made to understand the concept of hardware interfacing for real time data visualization and eventual analytics associated with it with prime focus on MATLAB and SIMULINK.

In the first half of the workshop, Simulink model development for control output application through their interfacing with ARDUINO was explained. The provision of logging and visualize sensor data in real time using SIMULINK was explained. Basic hands-on training on applications like controlling the blinking of an LED, motion of a servo motor & interfacing of a potentiometer were explained. The future implementation of the same was also explored. The second half of the workshop primarily focused on training the participants about working with time-stamped data used in IoT applications with a foundation for the emerging field of IoT data analytics. Examples for the same were explained using ‘Thingspeak’ channel and remote Android based control of the embedded systems. How to act on your live data and communicate using Third-party services like Twitter was very well demonstrated. Overall the workshop showed unmatched enthusiasm and satisfaction of the participants. 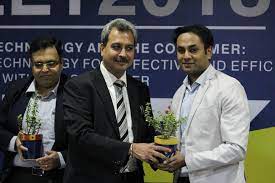